“From singing johns to heated commodes, Japan has long been number one when it comes to number two.” [Lonely Planet Guide to Japan, 2011].

Bathroom, loo, lavatory, WC, dunny, long drop, bog, commode, toilet….whatever you want to call it, this is the place where, in most countries, you go simply to relieve yourself.  In the west, it’s an upright “sit down” version, in the east a “squat” type sunk into the floor.  Japan has both.

The Japanese squat toilet is like most others in Asia, with the odd modification.

You will notice that it has a raised part at one end.  If you’re executing a number one, the idea is to face the raised side, lower yourself into  position with enough clearance, take aim and do the necessary.  This position is designed to minimise wetting the floor and everything else within close range, such as your clothing.  If you’re wondering about the bin in the corner, that is where you place soiled loo paper.  And the feet in the kangaroo socks are mine.

Amusing – and often challenging – as westerners find the squat toilet, it’s not where I wish to linger.  It is the western style, sit down version in Japan that captures the imagination of most visitors. For this is yet another example of Japan’s ingenuity in taking an ordinary western concept and turning it into something unique.

While I have no doubt that this is not the first post about the Japanese toilet – I commend you to Introvert Japan’s recent post “The miraculous Japanese toilet” – I am certain that it will also not be the last.

Our Tokyo hotel room toilet with its adjacent “armrest” of functions.

The spray and bidet jets are remarkably accurate, directed exactly to that part of the anatomy as depicted.  Nothing goes to waste.

A constant flow of warmth is pumped to the toilet seat in most models, one of the most endearing features of the Japanese toilet which, in my opinion, is worthy of its own ISO standard.

Push the button twice unless you enjoy the sound of unabated flushing. 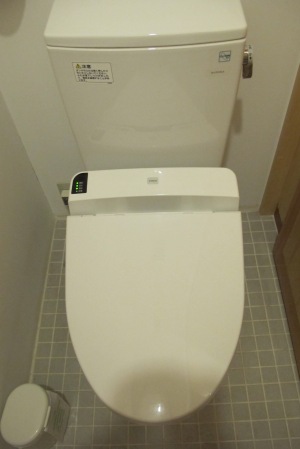 …with all the usual features plus a few others.  I  never got to figure out the purpose of the vertical buttons.

None of the above, however, compares with Sega’s development of the ‘‘toylet‘, a urinal that encourages men to take part in a series of contests by varying the strength and direction of their urine flow.

Each of the urinals is fitted with a pressure sensor in the bowl and a screen mounted on the wall above the unit.  Players can choose from five games, which are interspersed with advertisements for products and services. Sega hopes that users of these toilets will pay more attention to the adverts if they can also play games while using the facilities.

© AJapaneseDiary, 2013 ongoing. Unauthorised use and/or duplication of this material without the express and written permission of this blog’s author and owner is strictly forbidden. Excerpts and links may be used, provided that full and clear credit is given, and with appropriate and specific direction to the original content.

2 thoughts on “A funny dunny”